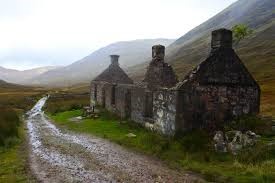 The Yorkshire Dales has 5,000 miles of dry stone walls, weaving straight (and not so straight) grey lines into the green fabric of the land. But there are also hundreds of roads and tracks crossing these Dales, providing high level, and dry, routes for cattle and sheep to be driven to the markets of Yorkshire and England. Mastiles Lane above Kilnsey Crag is a classic example. Our neighbours, the Scottish, would bring their surplus cattle down from the Highlands to places like Falkirk and Dumfries. From there the drovers would buy cattle, later sheep and horses also, and take them into England through Carlisle. Some would drive South in to Lancashire; others would head South East to the high ground of the Pennines and the great Cattle Fairs of Malham Moor and Middleham Low Moor.

At the height of the droving trade, around 1800, some 100,000 cattle a year were annually driven from Scotland into England. By this time everything was highly organised, Malham cattle fair was held in July, Middleham fair was in November providing young cattle to be fattened up over winter for the spring market. The date of 1800 is significant, this is the start of the Napoleonic wars! The Government had a growing Royal Navy and Army to feed and clothe (to pay for this Income tax was introduced for the first time in 1799) So, as you look across the lush green hill from the comfort of your car, think of how the Drovers managed 400 years ago!

The drovers themselves were entrusted with money from farmers in Scotland to dealers etc in England in the form of promissory notes, bills were paid when the animals were sold.

Places like Sutton Bank top, as it was originally called, Drover would rest, eat and drink before carrying on down the old road to Oldstead and York via Coxwold. These were what they called Low roads, with stone walls. This meant that the dogs were not needed any longer, so, they were sent back to Scotland! Not only that, the dogs would rest at roadside inns and be fed by the Innkeepers.

Sutton Bank Top was also number 33 in a chain of 103 beacons stretching from Jersey in the Channel Islands to Saxavord in the Shetlands. The first one lit was at Windsor Castle, 20 minutes later the beacon at Sutton Bank was lit, for the Queens Jubilee in 1977.