Gertrude Bell – Queen of the Desert 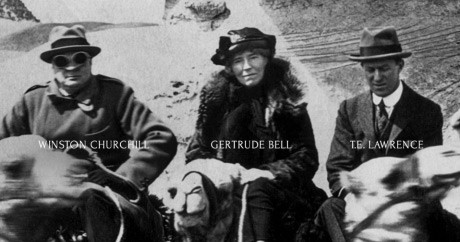 Is the name Gertrude Bell one that you’re familiar with? No? But the chances are that you will have heard of Winston Churchill and Lawrence of Arabia, in whose company Gertrude spent many hours.

Gertrude was an exceptional woman, a writer, traveller, political officer, administrator and archaeologist who explored, mapped and became highly influential to British imperial policy-making due to her knowledge and contacts, built up through extensive travels in Syria – Palestine, Mesopotamia, Asia Minor and Arabia. Along with T.E., Gertrude helped to support the Hashemite dynasties in what is, today, Jordan, as well as in Iraq.

Gertrude Margaret Lowthian Bell, CBE was born in Washington Hall, County Durham, in July 1868, so, although not a Yorkshire woman, she had many connections with our wonderful county and we are proud to celebrate her and spread the word about her great works, achieved during what was a relatively short life.

Gertrude’s family was a wealthy one, which meant that she could persuade them to provide her with a good education, offered to so few women of her generation. She attended Queen’s College in London and then Lady Margaret Hall, Oxford University at the age of 17, studying Modern History, and gaining a First Class Honours Degree in just 2 years.

Gertrude’s grandfather was the ironmaster Sir Isaac Lowthian Bell, an industrialist and a Liberal Member of parliament, and this is where the Yorkshire connections come in. Sir Isaac owned an estate at East Rounton, a village close to the county town of North Yorkshire, Northallerton. He also lived for some time in the beautiful Arts and Crafts manor house situated in front of the ruins of Mount Grace Priory, a stunning Carthusian Monastery, now in the hands of the National Trust, but cared for by English Heritage and also near Northallerton – mountgracepriory@nationaltrust.org.uk  A beautiful stained glass window, dedicated to her memory was erected in St Lawrence’s church in East Rounton and there are many newspaper clippings relating to her life and travels on display there, too. If you’re in the area, and would like to find out more about this amazing woman, both sites are well worth a visit.