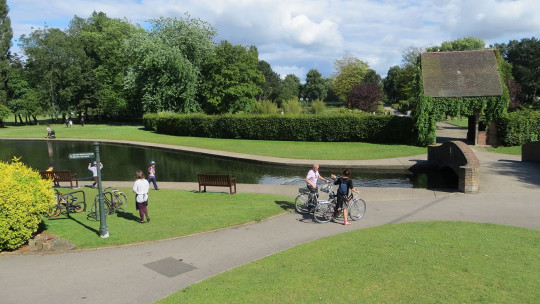 ROWNTREE PARK
The discerning visitor to York may well need a break from the numerous wonderful and wide-ranging attractions that the city offers. What better place to escape from the hustle and bustle of the crowds than to Rowntree Park. Situated just a short scenic stroll along Terry Avenue by the banks of the River Ouse, the park occupies around twenty acres of land comprising an ornamental lake, formal flower gardens, woodland walk, outdoor theatre space, various recreational facilities and a library café.

Rowntree Park was the city’s first municipal park and was given to the people of York by Messrs Rowntree and Company, the well-known local chocolate manufacturers. The park was opened in 1921and was designed by one of the family members, the architect Frederick Rowntree. The trees and shrubs were provided by a local nurseryman, James Backhouse, famous for his many varieties of lupin.

The Park was also known as the Rowntree Memorial Park. It was dedicated to the memory of the two hundred workers from the Rowntree Cocoa Works who had died or suffered in the Great War. A memorial in the form of a lych-gate and dovecot, complete with doves, was constructed in redbrick with Mock Tudor framing and contains a bronze plaque in memory of the factory employees. ln 1955 the Rowntree Company donated the iron entrance gates on Terry Avenue as a World War ll memorial.

After a saunter around the lake with its many geese and wildfowl, the Rowntree Park Café is a delightful spot to while away the time with some drinks and refreshments. From the balcony of this community café, there are some lovely views of the park which can be savoured whilst batteries are re-charged ready for another foray into York’s amazing past.