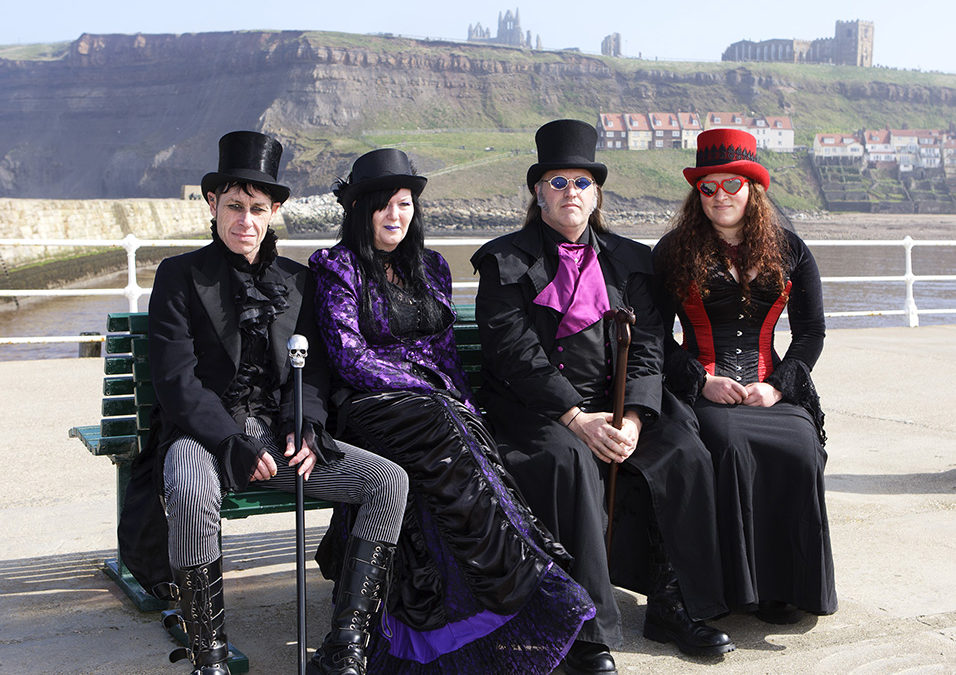 For any of you that watched the recent, brilliant 3-part BBC adaptation of Bram Stoker’s ‘Dracula’, the haunting scenery of the North Yorkshire fishing village of Whitby will be familiar. And it is against this dramatic and spooky backdrop that the Whitby Goth Weekends (WGW) are held.

The Festival’s humble beginning goes back to 1994 when a handful of pen-friends decided to meet up in a Whitby Pub. This meeting of minds and shared interest grew into a twice-yearly music festival that now attracts over 1,500 people from all over the globe. Founded by Jo Hampshire, the Whitby Goth Weekend has become one of the foremost Gothic events in the world.

Expect to see stunning costumes from Goth to Steam Punk; silent film classics with organ accompaniment; a modelling contest; live music events at various venues around the town; beer tasting events; talks and lectures including ‘What’s at stake for the Carpathian Wolves?’ and of course, the Bizarre Bazaar – over 100 traders selling all manner of Gothic wares.

Whitby was chosen as the venue of the Goth Festival for its connections with the story of Count Dracula. Author and business manager, Bram Stoker arrived at 6 Royal Crescent, Whitby, at the end of July 1890. He was at the end of a busy theatrical tour in Scotland with Henry Irving and had a week to himself before the arrival of his wife and son.

It was during this time, strolling around the cobbled streets of this vibrant fishing village, that Stoker got the to bring his lead character in his latest novel, Count Wampyre, to the English seaside town.

The literary craze at that time was the gothic genre – stories set in foreign lands full of castles, caves and convents. The dramatic windswept cliffs, ruined abbey remains silhouetted again the sky, swooping bats and the town’s association with Jet – a semi-precious stone used in mourning jewellery – gave Stoker a thrilling and chilling denouement to his tale.

When you visit, don’t miss the magnificent 11th century ruined Whitby Abbey which stands on the site of a 7th century monastery, St Mary’s Church with parts that date back to the 12th century and its extensive graveyard, and the 199 steps that lead steeply up form the cobbled streets of the town to the cliff top.

“For a moment or two I could see nothing, as the shadow of a cloud obscured St. Mary’s Church. Then as the cloud passed I could see the ruins of the Abbey coming into view; and as the edge of a narrow band of light as sharp as a sword-cut moved along, the church and churchyard became gradually visible… It seemed to me as though something dark stood behind the seat where the white figure shone, and bent over it. What it was, whether man or beast, I could not tell”. Chapter 8, Dracula, Bram Stoker