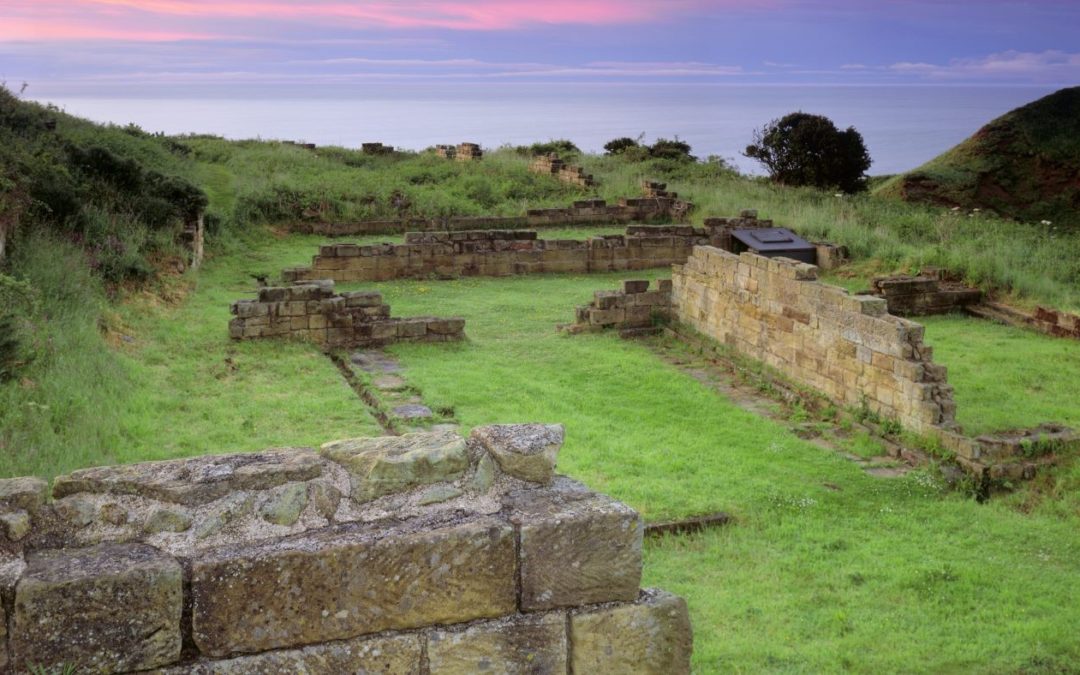 Alum has been mentioned throughout history from Egyptian, Indian and Chinese dynasties from Before Christ. It had many uses in chemistry, medicine, metallurgy (including removing impurities in gold production and turning iron into copper). Even dating back to 23AD there are mentions of its use in being required as a fixant for dying wool bright colours.

It had a value higher than gold…..But Alum came from rock -and its production was a closely guarded secret – often described as “Alchemy”

Henry VIII broke with the Catholic church and declared himself head of the Church of England. Off the back of this the Pope refused to supply Alum to England. This meant that the bright coloured textiles production stopped in England as we were unable to gain supply of the dye fixant from Europe in any quantity. There was an urgency to find the correct rocks and produce alum in England and patents were granted for production in Cornwall, Devon and the Isle of Wight. All these failed as we now know the rocks were unsuitable. No alum was produced in England throughout the rest of the Tudor period.

Thomas Chaloner – a landowner from North Yorkshire who lived near Guisborough had travelled extensively in Europe and had some knowledge of the Tolfa Hills. He noticed the rocks on his land, bore a similarity to those of the Tolfa Hills and applied for a patent from James I for Alum production. Chaloner had already tutored James I’s eldest son Henry which made the approach easier and  James I was keen to grant the patent as it was called because it meant that if successful the crown could gain an income without going through parliament and raising taxes. (Chaloner eventually was one of the nobles who passed the death sentence on James I’s father Charles I after the Civil War).

The Papal alum works realised the importance & value of the secret of alum productions alchemy – turning common rock into precious alum. Their workers were kept in virtual captivity to protect the great secret which linked so closely to papal wealth.

Chaloner not to be put off by this decided to embark on a dangerous mission. He sailed into the Papal alum port of Civitavecchia and persuaded two of the papal Alum workers to abscond with him and travel back to Yorkshire. They were apparently smuggled aboard his ship in two barrels.

3000 tonnes of alum a year were being produced by the early 1800’s. It takes 12 tonnes of Shale to produce 1 tonne of alum. To get the 12 tonnes of shale 3 times that amount (36 tonnes) of overhanging rock must be removed. Alum is a double sulphate – ammonium aluminium sulphate. You need a rock which contains aluminium silicate (all rocks pretty much do this). The rock must also contain sulphate (found in iron pyrite – iron sulphide), carbon and water.

The Lower Jurassic shale of the North Yorkshire Coast is the perfect rock.

The Production Process & the Floating Egg

Shale was hacked form the North Yorkshire cliff side and dropped off wooden platforms onto piles of brushwood which had also been placed on the beach. Once the piles reached 50-100ft – the brushwood set on fire and the shale was burnt for 9 months. (The carbon in the shale kept the rock burning after the brushwood had burnt out). The burning causes the pyrite FeS2 – to lose a sulphure molecule which combines with the water in the rock to form sulphuric acid. The sulphuric acid separates the Aluminum from the Silicate and then the sulphure combines with the aluminium to form Aluminium Sulphate. But you do also have Iron Sulphate left over from the pyrite. After the burning, all that is left of the rock is a white powder.

Urine was collected from along the Yorkshire coast as well as shipped in from Newcastle and Sunderland. The trade in urine led to phrases such as– piss poor, piss pot and being so poor that you haven’t a pot to piss in!

The challenge next was that there are 2 sulphates in the solution. If these are crystallised out together the alum is so impure it is useless and has no worth. But both have different saturation points where they crystallise out. But how when the liquid was heated did you know when the pure ammonia aluminium sulphate could be collected separately. You can only imagine having to work in an industry where the smell of evaporating wee was prevalent!

The answer was a floating egg! – The secret of the papal alum production was that by putting a hens egg in the liquid when it was heated – the crystals formed and needed collecting as soon as the egg rose to the surface of the liquid.

Alum Works along the Yorkshire Coast

Alum works were set up all along the coast – in Sandsend, Loftus, Boulby, Port Mulgrave, Kettlleness, Sandsend, Saltwick , Ravenscar and Hawsker. The remnants of these can still be seen now. There is a wonderful trail at Sandsend and also information boards at Ravenscar. These are fascinating  to visit and all that is left of this industry which thrived for nearly 300 years in the area. The alum making transformed common shale into uncommon wealth for landowners and kings and twons such as Sandsend were built of the back of it. Whitby was an important fishing and whaling harbour before the alum boom, but owes much of its growth as a port to Alum export. Sadly in the 1870’s alum production using sulphuric acid meant the process of alum production became a simple process and the industry quickly died.

A number of trails exist where you can be guided by a Blue Badge Guide around this industrial archaelogy.

If you want to read more – The Floating Egg by Roger Osborne is a great read detailing not just the history of alum but also the overall geology of the Yorkshire Coast.