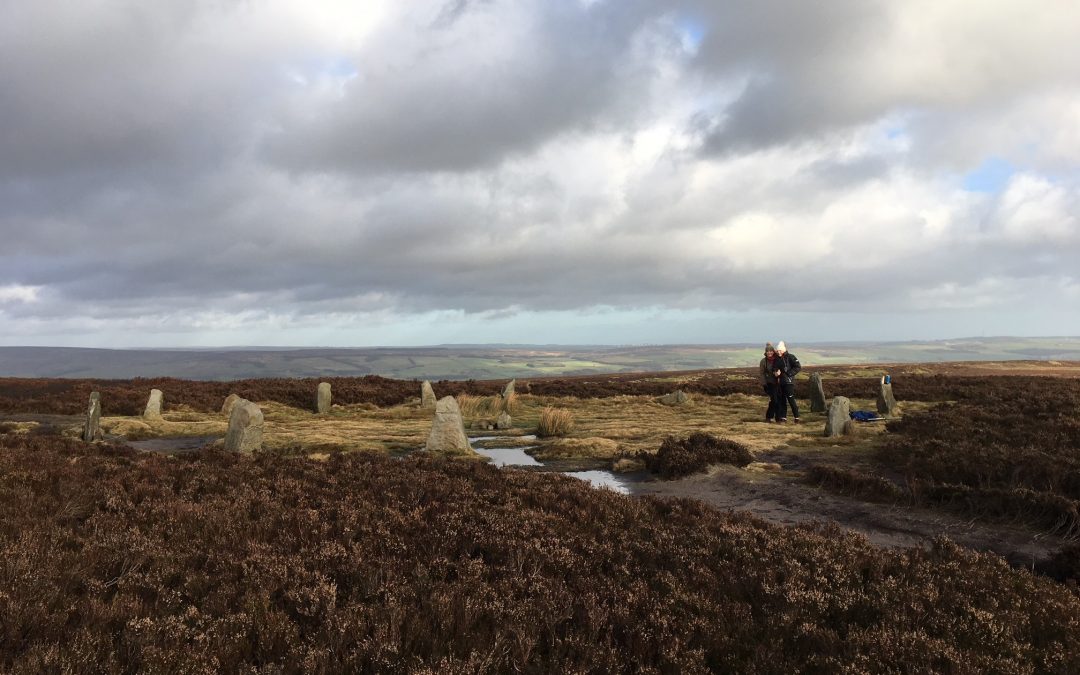 If you’re out for a stroll on Ilkley Moor – a great place to head for is the Twelve Apostles Stone Circle.

It’s not quite to the scale of Stonehenge but it is a delightful circle which dates back to the Bronze Age (4500 – 2700 years ago) and is believed to be at least 1000 years older than Stonehenge. The stones form a circle with a diameter of 16 meters and there are now 12 millstone grit stones – the apostles (although it is believed that there may have been twenty at one time). The tallest stone is only a meter and a half tall.

The Stone circle can be reached by an hour’s yomp from the famous Cow and Calf Rocks on the outskirts of the Victorian Spa Town of Ilkley. Set high up on the Moor at a height of 380 meters above sea level – the panoramic views from the twelve apostles make the walk all the worthwhile. On a clear day you can make out Menwith Hill and the White Horse of Kilburn on the Hambleton Hills.

Various theories have been suggested for the formation of the stone circle. There are many others on high ground not just in Yorkshire but across Britain and Ireland. It is now believed that the stones were used to observe the sun and the moon in what is now known as a “Druidal Dial Circle”. This would allow bronze age settlers to identify when winter was coming or spring arriving to be able to start planting crops.

During the Bronze Age the climate was much warmer and humans would have cleared the area of trees to start using the valley tops for grazing and agriculture.

On the winter and summer solstice – the stone circle attracts many visitors, and there is often a party atmosphere as people share sloe gin and hip flasks of whiskey! Many people come to watch the sun rise and set from the circle.

More recently there have been a number of UFO sightings near the circle – but I’m not sure if this is just too much sloe gin!

On Ilkley Moor there is much more evidence of prehistoric settlement from enclosures used by late Neolithic settlers 5000 years ago as well as over 250 cup and ring marked stones also dating from the Bronze Age.